Accolade wines, an Australian brand, approached DAf to put together a new tagline and creative claim, as well as new names for some of their wines, and also develop new packaging across the Anakena range. It was important to them to recognize both the terroir of their wine, which is Alto Cachapoal, in central Chile, and also the origin story of the birdman which is on their label, which comes from Easter Island. The brand itself is named for a beach on Rapa Nui (Easter Island).

Anakena sought to appeal to the millennial market, as an exciting option within New World wines with an origin story as captivating as that of the birdman, which is their icon. Their goal was to increase in global distribution to build the brand in the US, Canada, Latin America, Japan, Korea and China, and to relaunch in Europe.

Taking into account the volcanic origins of both the soils of Alto Cachapoal, and Easter Island itself, from which Anakena takes its name and birdman symbol, we seized on the powerful force and quality of volcanoes. The terroir of the wine comes to the forefront when we focus on the volcanic soil, and this squared with the brand’s desire to focus on the wine’s origin. Fiery, enriching lava became one of the secondary symbols of the wine, as we developed the tagline “Wines from Within“ as well as the campaign claim “Profound Wine Grown From Chile’s Volcanic Soils.“ We maintained the use of their iconic birdman symbol, taken from an annual ancient rite that took place between Easter Island and three nearby rocky islands, and respected their naming convention, using names from indigenous languages that connect consumers to the wine.

DAf produced two key visuals, both heavily volcanic in nature. The first features Anakena’s iconic Birdman figure, and the words “Wine from Within“ set against a backdrop that shows a vineyard and sky in tones of grey, followed by a transition to lava. Emblazoned on the lava, representing fiery magma, is another instance of the birdman figure. The second key visual consists of the magma-colored birdman burning through a surface of pahoehoe lava flow, which is smooth and ropy-looking, and has the same claim as above. Both have at the bottom the creative phrase “Profound Wine Grown From Chile’s Volcanic Soils.“ 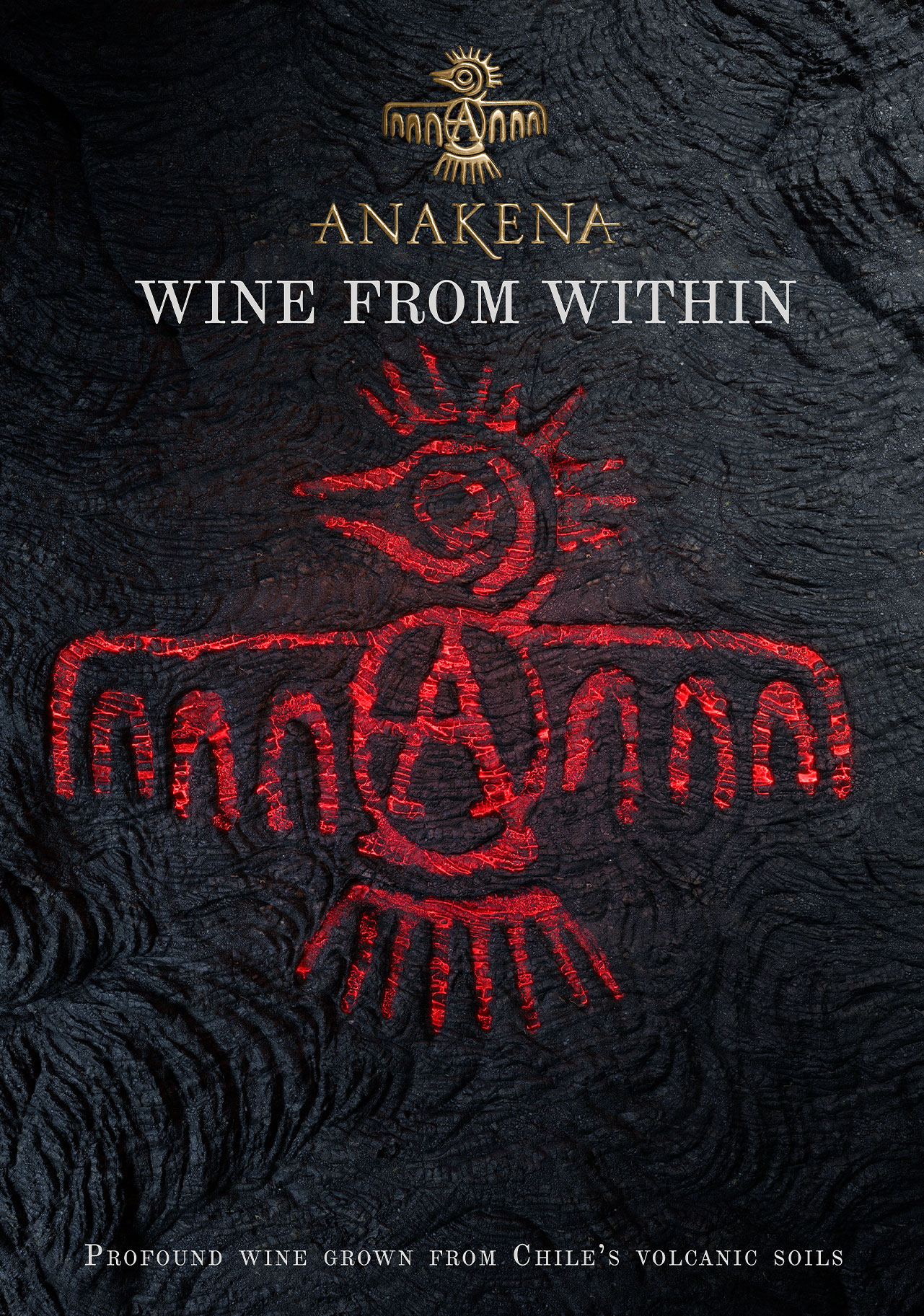 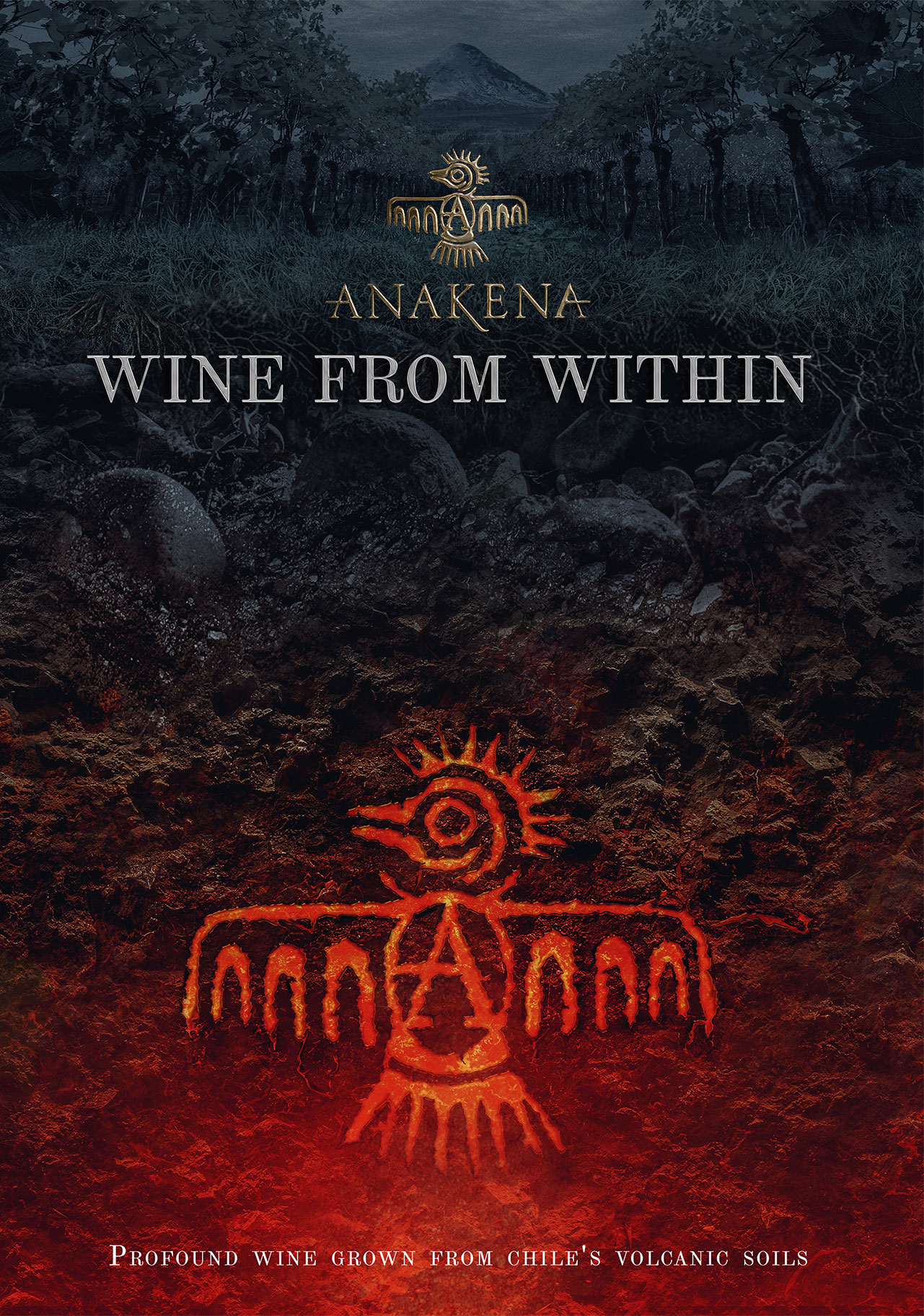 When Accolade came to us, they had some names that were set in stone, and we took these as the basis to create names for other wines in several lines. We took into consideration the importance of recognizing the native lands and peoples of Chile, and developed names in accordance with these conventions, opting for short, two-syllable words that are simple to pronounce and convey attributes associated with the wine, using terms for light and community for example.

All of the six new wine labels DAf developed have a jagged edge on the bottom symbolizing the contour of Andes against the sky, and Anakena’s terroir in Alto Cachapoal. Alwa, which means sunrise in Aymara is a bright textured gold foil, and Birdman, their Cabernet Sauvignon has symbols of rongorongo, ancient glyphs from Rapa Nui on a red label. Khana, which means light has a label that depicts a golden sunrise on gradient foil, while Nuna, which means soul or spirit, has a black-to-red gradient label has red strikes running through it. Ona, named for a people from Tierra del Fuego, has rustic stripes of alternating red and gold symbolizing the body paint they used. Finally, Tama, meaning group or community uses a stone background reminiscent of anthropomorphic, pre-Columbian carvings.